Frank Lloyd Wright is the most famous American Architect in history, a Modern Design guru that invented more than half the building blocks of styles we use popularly today during his lifetime.

His architecture has inspired many other architects, designers, and even artists, and his spirit of ingenuity still thrives within the United States, and the world, today.

What better way to see and study all of Frank Lloyd Wright's most influential work than with our Wright Across America tour, a road trip spanning the entire U.S, from California to New York. Take a week to explore all the finest architecture hotspots from the genius himself, and let us handle all the details!

Of course, you've heard of and probably even seen for yourself the world-famous New York Guggenheim Museum, but have you studied the impressive landmark architecture itself during your visit? You most certainly should, this being one of the most influential Frank Lloyd Wright designs of all time. 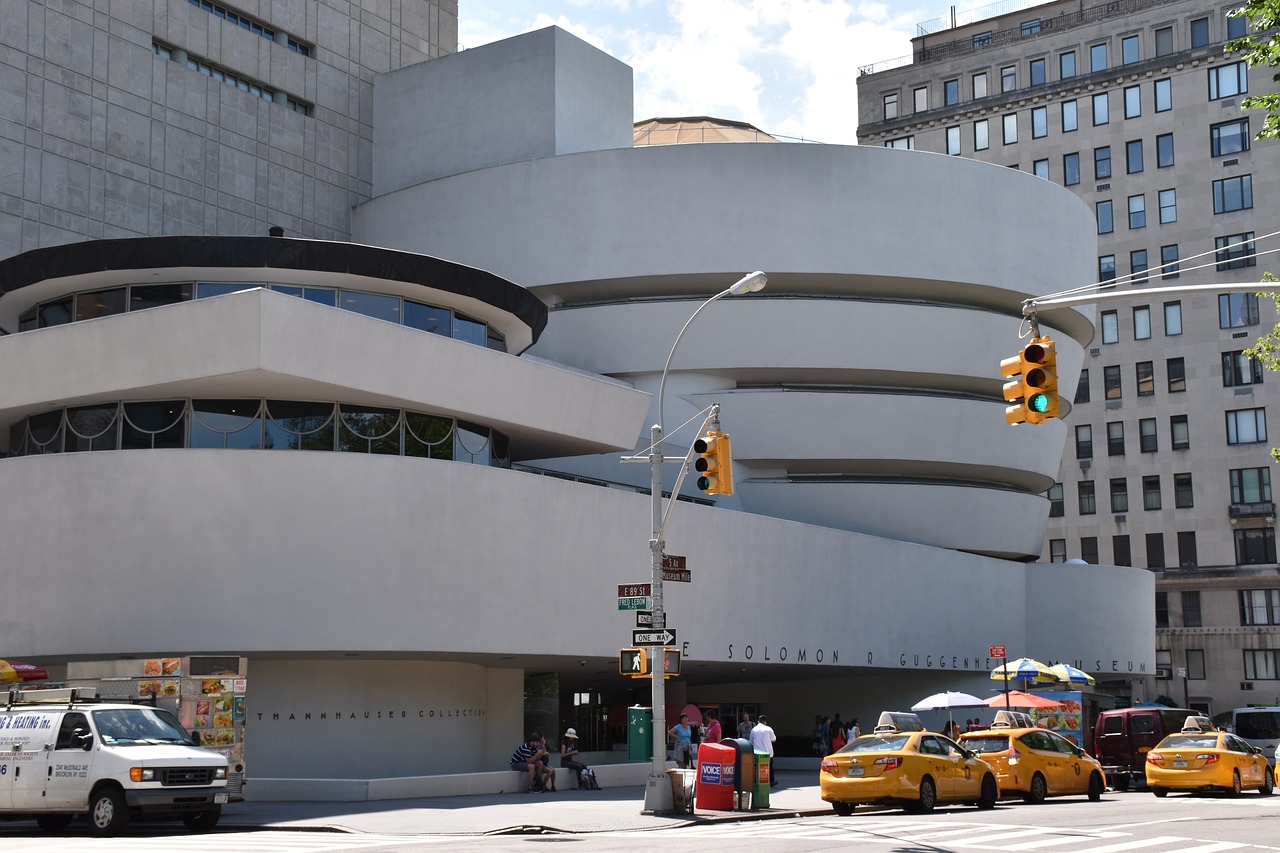 The Guggenheim was proposed in 1943, completed in 1959. Originally Wright didn't want New York City as the location but settled on Fifth Street near Central Park, hoping to keep with his organic design element idea. The building itself takes on an ancient Mesopotamian pyramid (Ziggurat) design, away from the conventional practice of walking through a museum then retracing one's steps to get back out. Instead, Wright made the building in such a way that guests are able to take an elevator up and then leisurely make their way down toward the exit, self-contained galleries located on each floor along the sloping continuous ramp down. This open rotunda and nautilus shell allow for free-flowing space, rigid geometry, and arc and triangle-filled Modern Design throughout.

One of the most beautiful and astounding Frank Lloyd Wright structures of all time will make your next stop, the home known as Falling Water, in Mills Run Pennsylvania. This home used to belong to the well-known Kauffman family, the family purchasing the property after running a summer camp off of Bear Run River nearby for their department store workers.

The home itself combines Modern Architecture and Organic Architecture, the latter of the two defined as an environmentally integrated approach to design. Frank Lloyd Wright began this practice after disagreeing with his Mentor, Louis Sullivan's words 'Form follows Function', arguing that Form and Function are one. 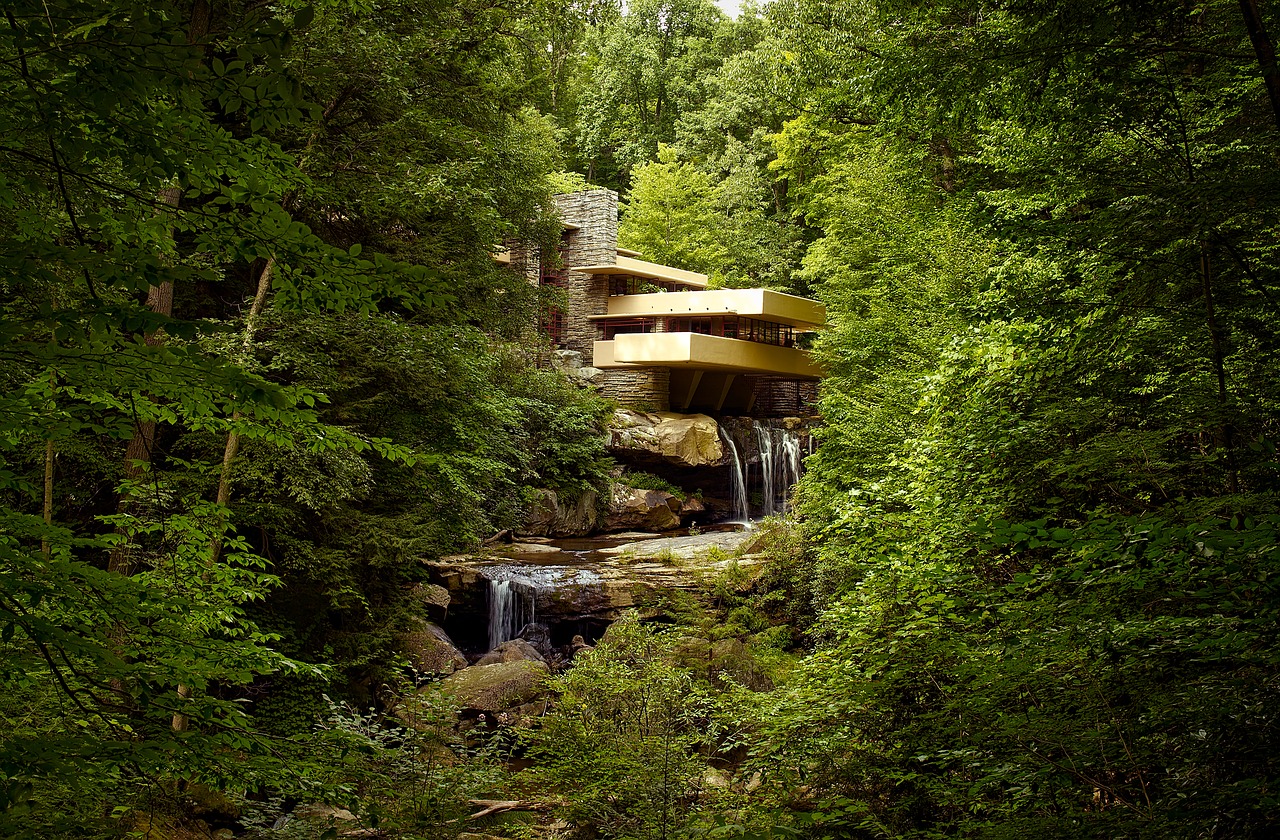 Tours inside will take you through the home, gardens, and cafe, the entire experience allowing you to live as the Kaufmann family did, eating in the dining room, conversating in the living room, and relaxing on the terrace. Of course, the piece de resistance of the site is the waterfall the home is built on, the entire structure appears to have no solid foundation, stretching eerily over the 30' falls below. Trust us, the sight will be just as amazing and awe-inspiring as it was on Time Magazine's cover in 1938.

Known for its outstanding architecture in general, Chicago Illinois will serve as a major sport in your road trip, a bevy of FLW design throughout. Frank Lloyd Wright spent many years in Chicago as a resident, eventually becoming a pivotal architect in the city's history and culture. Oak Park is the most popular site to see his work, especially the iconic Frank Lloyd Wright Home and Studio.

This popular tourist and education spot gives daily tours of the home, studio, and even the surrounding historic neighborhood. Professional guides will take you through the home as they give great insight into Wright's design and impact on architecture in general, more specifically discussing such points as his life, early career, and future legacy. Learn about the experimental materials and features Wright used in this home, the entire location serving as an excellent example of Modern Architecture.

One of Frank Lloyd Wright's finest Chicago architecture gems comes in form of the Robie House, the historic home of a local businessman, Frederick C Robie. Located in South Woodland, this Prarie style home is over 100 years old with a beginning construction date of 1908 (completion 1910). The Robie House is open 9-4 each Thursday through Monday, a time span in which you can get an interior tour of this 'masterpiece of prairie-style and icon of modern architecture' (Frank Lloyd Wright Trust). Inside the home, you will see the butler pantry, master bedroom, kitchen, children's playroom, living room, dining and guest rooms and entryway foyer. The tour will last 45-60 minutes unless you opt to take the 90-minute Private tour with access to secret spots on the third floor as well as the servant wing.

This is truly one of the best spots to see prairie architecture aspects at work, the strong exterior horizontal lines, low roofs, and natural material highly reminiscent of the plains of the Midwest.

Another Chicago FLW hotspot is nearby in Oak Park, an easy road trip stop along your Wright Across America path. The Unity Temple is was built in 1908, an American and European styled religious structure that adds in Frank Lloyd Wrights's signature modern aspects, such as the completely concrete building material used. This spot is 'bold in design, modest in the budget, urban in the site, and unconventional in materials', also considered to be the only remaining surviving public prairie period building.

Frank Lloyd Wright himself is famously quoted saying 'The Unity Temple makes an entirely new architecture...contributing to modern architecture as a whole', a huge testament to how influential this spot really is in the grand scheme of American architecture. Enjoy an interior tour showing the two sides of the structure (the worship and the gathering sides), exposed concrete features, and a popular low connecting foyer and entryway.

**Note that before leaving Chicago you may want to check out an FLW themed tour, such as the Wright Around Oak Park Tour. You may also want to add on two excellent FLW properties near Buffalo/Niagara; The Martin House Estate and Graycliff Estate.