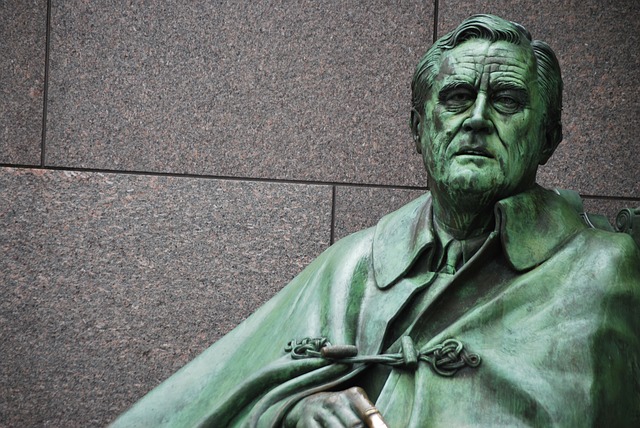 Begun in 1978 and dedicated by President Bill Clinton in 1997, the FDR Memorial commemorates the life and legacy of the nation’s 32nd president. Over seven acres, the president’s four terms in office are illustrated with beautiful South Dakota red granite, bronze statues, and illuminating quotes that spotlight FDR’s philosophies.

The only president to be elected for more than two terms, President Roosevelt’s memorial includes four “rooms,” separated areas dedicated to each term. Each “room” features a different event or major aspect of each term including those focusing on the Great Depression and WWII. This is the first presidential memorial to feature the First Lady as Eleanor Roosevelt is portrayed standing next to the U.N. emblem with whom she worked as a delegate, a chairperson, and helped to draft the Universal Declaration of Human Rights. This is also the first memorial to feature a presidential pet, President Roosevelt’s Scottish terrier Fala, shown sitting loyally at her master’s feet. Other areas depict a fireside chat and a bread line, showing the political issues and principles of the time.

The FDR Memorial was the first memorial to be wheelchair accessible in memory of the president’s own disability and includes braille reading features for those without sight.

Located along the Tidal Basin in West Potomac Park, the FDR Memorial is located near the Jefferson Memorial and the Martin Luther King, Jr. Memorial among others. The memorial is open to visitors 24 hours a day though park rangers are available only certain hours for assistance and to answer questions.