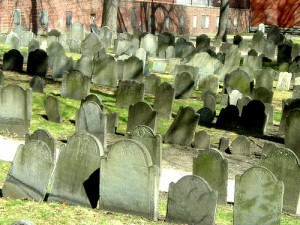 Named for the grain storage building that used to stand adjacent, Granary Burying Ground is the third oldest burying ground in Boston proper. American notables like Paul Revere, John Hancock, and Samuel Adams are buried here alongside hundreds of colonial Bostonians. Founded in 1660, it is estimated that approximately 5,000 souls rest in this cemetery though there are only 2,300 headstones. Thousands are left unmarked because the cost of funerals led whole families to be interred in a single grave. A great obelisk marking the burial site of Benjamin Franklin’s parents is a note-worthy attraction at this site as is the Infant’s Tomb where hundreds of children are buried as well as the grave of the Boston Massacre victims of 1770.

This morose and macabre destination is a popular attraction in Boston for its famous names and memorials. Tour groups and interested individuals regularly stop by to peruse the stones, finding familiar names or colonial ancestors. History is not always pleasant and is often sad but attention and conservation of their life stories is a beautiful way to remember the dearly departed. Learn about those who are buried here and how they lived, take in the beautiful and peaceful scenery of the park area, and pay your respects to the patriots.

The Freedom Trail Foundation offers guided tours such as the African-American Patriots tour and the Walk Into History tour which feature the Granary along with other attractions. You can also take a self-guided tour through the burying ground and explore the images engraved on the gravestones such as the grim reaper or Father Time. Guidebooks and brochures are available to complete your experience of this historical site.