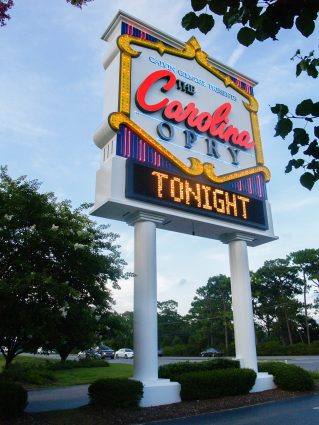 For a high-energy performance, your group won’t soon forget head to the Calvin Gilmore Theater to experience the much coveted Carolina Opry. Located on Kings Hwy along the Grand Strand, The Carolina Opry has been praised by CNN, the New York Times, and even NBC as a top attraction and show within Myrtle Beach, the South Carolina Department of Parks and Rec even going so far as to calling it the ‘State’s Most Outstanding Attraction.’

The Carolina Opry puts on daily performances that combine high energy dances, incredible vocals, and high-tech effects such as lasers and lights, the entire experience allowing your group to really ‘feel the music’. The genres of performance here cover a wide base of varying interests, from rock and roll and pop to gospel and golden oldies.

The most popular show here is the namesake TCO (The Carolina Opry), a show that has been around since the beginning, first starting 32 years ago. This show lasts 2 hours and provides your group with a seriously high energy performance that incorporates music, dance, and comedy, the entire experience earning the coveted Governor’s Cup. There is also the Time Warp show, Christmas Show of the South, Pure Magic, and always incredible Thunder and Light laser show.

Groups can choose to add on dinner packages, schedule meet and greets with the cast, and even sign up for various educational studio workshops while here.