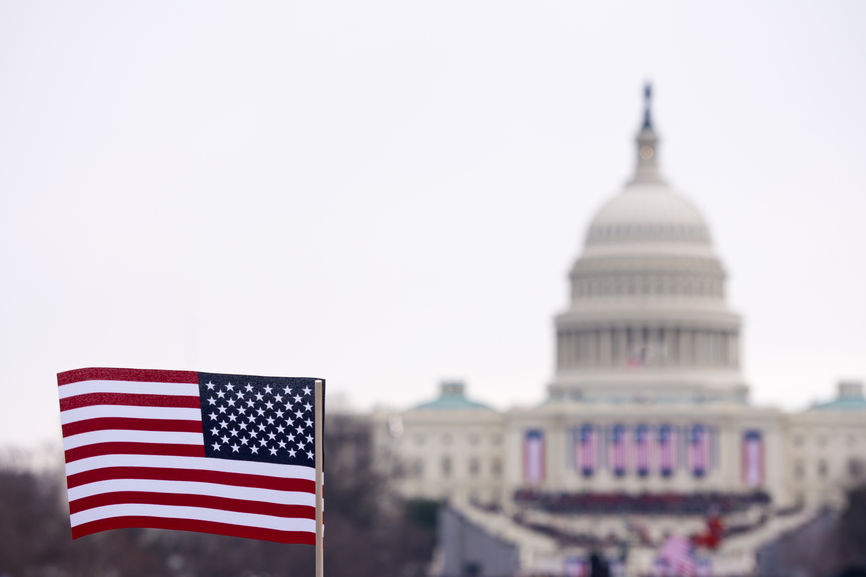 Arlington National Cemetery
You’ll recognize Arlington National Cemetery at once by the endless waves of uniform white headstones unfurling across 600+ manicured acres marking the graves of more than 400,000 soldiers and their loved ones. This cemetery is one of the most popular tourist attractions in Washington, D.C. - its rich history and beautiful setting make it a perfect place for remembering, for reflection, and for honoring U.S. soldiers past and present. Presidents John F. Kennedy and William Howard Taft are buried here.

Iwo Jima Memorial
The United States Marine Corps War Memorial – better known as the Iwo Jima Memorial - depicts one of the most historic battles of World War II. This monument, situated at the entrance to Arlington Cemetery, is dedicated to all Marines who have given their lives in battle and is sculptor Felix de Weldon’s recreation of an actual shot captured by news photographer Joe Rosenthal of six brave, young soldiers – five Marines and one Navy corpsman- raising the 2nd American flag planted on Mount Suribachi. Only three survived.

FDR Memorial
Situated Southwest of the National Mall along the tidal basin shore is the artful and thought-provoking 7.5 acre FDR Memorial, dedicated to the memory of U.S. President Franklin Delano Roosevelt. Its open-air features include a series of symbolic waterfalls and wonderful sculptures inspired by old photographs, with Roosevelt’s words inscribed throughout; the memorial traces 12 years of important U.S. history through a sequence of four outdoor “rooms”, one for each of FDR's terms of office. A bronze statue of Eleanor Roosevelt, depicted standing in front of the UN flag, signifies her dedication to the United Nations; to date, she is the only first lady represented in a presidential memorial.

Mt. Vernon
A stop at this prominent historic landmark presents to visitors an enduring reminder of the life and legacy of the Father of Our Country – a successful Virginia gentleman planter and entrepreneur - and ultimately the leader of a fledgling democratic nation. What was once a simple one-and-a-half-story farmhouse evolved into a grand home and prosperous plantation; First President George Washington’s Mount Vernon estate is now one of the nation’s most visited historic sites? You and your travel group will truly enjoy a tour of this authentically interpreted and appointed 18th-century home sprawled on lush gardens and grounds. You’ll explore intriguing museum galleries, see our First President’s tomb, his progressive four-acre Pioneer Farm, a carefully reproduced working gristmill and distillery and discover first-rate dining and shopping opportunities while visiting this outstanding national treasure!

National Museum of American History
Day two of your D.C. adventure takes you and your group to the incredible National Museum of American History, the premier institution charged with the considerable undertaking of telling the history of our great nation through its series of incomparable collections of millions of artifacts and an exciting, engaging and ever-fresh visitor experience. An authentic blue and red Conestoga wagon with its distinctive sloping lines and white sheltering bonnet of a canvas top greets visitors to the 750,000 square foot museum; three floors of exhibitions explore major themes in American history and culture, from the War of Independence to the present day. Here, you will find Abraham Lincoln’s top hat, Dorothy’s ruby slippers…and everything in between.

Library of Congress
Next up: a tour of the magnificent Library of Congress - the nation's oldest federal cultural institution and the world’s largest library - sheltering more than 128 million items including books, manuscripts, films, photographs, sheet music, and maps. As part of the legislative branch of government, the Library houses several internal divisions, including the Office of the Librarian, U.S. Copyright Office, Law Library of Congress, Library Services, and the Office of Strategic Initiatives. Visitors flock year-round to partake of its wonderful exhibitions, interactive displays, concerts, films, lectures, and special events.

Air & Space Museum
Here, you and your group will discover the largest and most significant assemblage of aviation and space artifacts, relevant artworks and educational materials on the planet. Trace the fascinating history of flight and planetary exploration through examination of the Air and Space Museum’s massive, unparalleled collections – which began in 1876 with a pair of Chinese kites and grew to include more than 3,500 objects from the historic Apollo Moon landing effort – including the Apollo 11 Command Module, "Columbia" – the only part of the spacecraft to return to Earth!

Museum of Natural History
Perhaps you’re of the notion every trip should incorporate a fabulous learning experience; if so, you must be sure to dedicate a portion of your group’s D.C. getaway to visiting this iconic treasury of natural history exhibits. The American Museum of Natural History is a behemoth - be prepared for lots of walking and a return trip or two; better yet, download and print the museum map and chart your maiden course of discovery by choosing from the myriad exhibitions to design your group’s self-paced tour of this world-renowned scientific and cultural institution! Lose yourself in a lush butterfly rainforest, wrap your mind around the paradoxical “Power of Poison”, excavate the Fossil Halls and discover mysteriously morphing denizens of the ancient deep in the Hall of Vertebrate Origins. Set your imaginations adrift in the 29,000 square foot Milstein Hall of Ocean Life - embark on a fascinating journey through 14 full-sized dioramas and 8 stunning ocean ecosystem displays - then wriggle beneath the gargantuan 21,000 pound model of a Blue Whale and say, “bioluminescence!”

Supreme Court
Important work will be underway as you arrive at the magnificent Supreme Court building – home of the highest court in the nation, where visitors are encouraged to take advantage of a variety of educational programs including informative 30-minute Courtroom Lectures, a visitors’ film, and Supreme Court-related exhibitions. When the court is in session – during the months of October and April – groups may elect to sit on oral arguments. Even if you don’t enter the building, its incredible Neoclassical architecture will sufficiently impress!

Capitol Hill
Your tour of Washington, D.C. highlights would be incomplete without a visit to the seat of our legislative and judicial branches. You and your travel companions will truly enjoy exploring the breathtakingly magnificent Capitol and Supreme Court Buildings, the stunning Jefferson Building at the Library of Congress and the beautiful U.S. Botanic Garden and Conservatory.

National Archives
The National Archives and Records Administration stores and provides public access to those original documents that set up the American government as a democracy in 1774; additionally, records of the nation's civil, military and diplomatic activities are held here for present and future generations. The Archives is our nation's record keeper; of all the documents and materials created in the course of business conducted by the Federal government, only 1%-3% are so important for legal or historical reasons they are retained and preserved forever. On this tour, you and your travel group will be transported on a fascinating journey through history and afforded an exciting opportunity to examine the United States Government's Charters of Freedom, the U. S. Constitution, the Bill of Rights, and the Declaration of Independence.

Union Station
The last stop of the day is Union Station - a historic major train station and transportation hub opened in 1907. It’s Amtrak’s headquarters, and one of the busiest rail facilities and most popular shopping destinations in the country, seeing more than 40 million passengers and visitors a year. Described as “a beautiful homage to architecture and art”, Union Station tenders guests a welcome departure from the customary station experience, whether you’re waiting on a train, needing a great cup of coffee, an excellent bite to eat, a phenomenal shoe shine or simply prefer to get your shopping fix surrounded by extraordinary architectural elements and turn-of-the-century luxury.

Day Four of your Washington, D.C. excursion is a special one! Wake up, throw on comfortable shoes and grab a quick breakfast; you’ll need plenty of energy for the day ahead, which kicks off with a stop by the White House – the epicenter of political life in Washington, and home of our President and the First Family - even more impressive up close and personal than one would imagine. What a fantastic photo op, and a true lifetime memory in the making!

National Holocaust Museum
At the laying of the Museum’s cornerstone in 1988, President Ronald Reagan remarked, "We must make sure that all humankind stares this evil in the face." This living memorial to the Holocaust artfully presents a poignant cross-section of those horrible, tragic years through a series of relevant programs, exhibits, and displays - a truly moving and enlightening experience underscoring the importance of confronting hatred, promoting human dignity and crushing the future of genocide.

Washington Monument
Recently the Mount Vernon Place Conservancy discovered a 200-year-old time capsule with contents including glass jars carefully wrapped in daily publications and filled with mysterious “papers” and a scattering of US coins during scheduled maintenance efforts at the historic Washington Monument in the cultural center of the city. “At the time the monument was begun, it was the most heroically scaled memorial in the country. It is largely due to this impressive first monument to Washington that Baltimore was known at home and abroad as 'The Monumental City.’" Lance Humphries, chairman of the Conservancy's restoration committee, was quoted as saying in the conservancy's press release. Visitors who opt to tackle the 229 stairs to the top of this oldest surviving monument to our First President are rewarded with matchless hilltop views of the state park and surrounding area.

Lincoln Memorial
This magnificent memorial to President Abraham Lincoln - the issuer of the Emancipation Proclamation – enjoys a regal view of the Washington Monument from its seat across the reflecting pool on the National Mall. Depicted time and again in popular culture and inscribed on the back of every five-dollar bill, it was the site of Martin Luther King's "I Have a Dream" speech, delivered on August 28, 1963; the date is inscribed on the monument’s steps.

Vietnam and Korean War Memorials
You’ll discover these moving and magnificent tributes to those selfless Americans who made the ultimate sacrifice to preserve precious freedom –ours and others’ - near the Lincoln Memorial on the National Mall. As you stroll alongside a 493.75 foot long, polished black granite wall, you’ll find inscribed the names of a staggering 58,209 servicemen and women who lost their lives to the horrors of Vietnam. Just South of the reflecting pool, a chilling series of stainless steel soldiers advancing through rice paddies and a magnificent pictorial granite wall salute the memory of the 5.8 million Americans who served in the U.S. armed services during the Korean War, one of the hardest fought in the history of our nation – that claimed the lives of 54,246 Americans, with more than 8,200 of those lost at sea or missing in action.