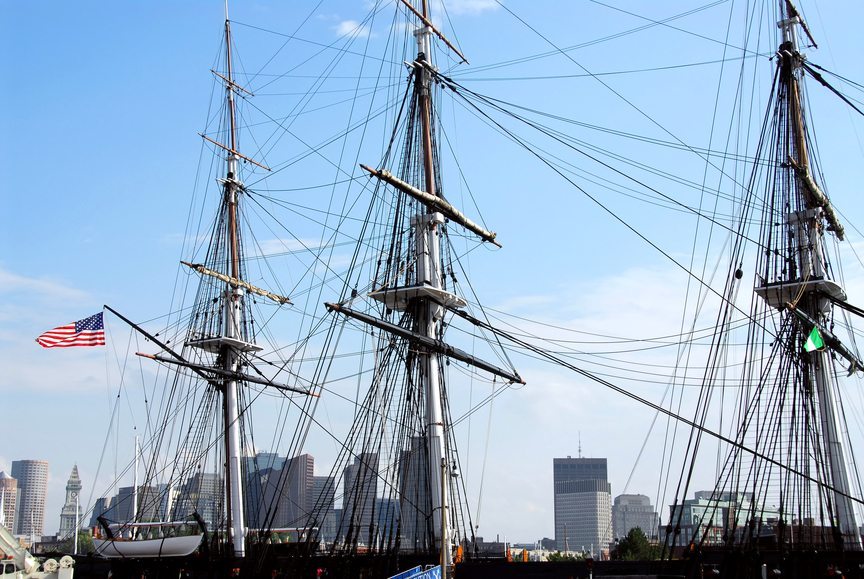 Concord Museum
Concord, Massachusetts boasts a long, rich American history. It was the site of the first battle in the American Revolution and the home of celebrated wordsmiths Henry Thoreau, Ralph Waldo Emerson, and Louisa May Alcott. At Concord Museum, which houses one of the oldest and most cherished collections of Americana in the country, the city’s role as a cultural center is celebrated throughout, in its ever-changing exhibits, in its galleries housing relevant displays of intriguing artifacts and in its perfectly furnished period rooms. Here, amongst myriad Colonial memorabilia, you’ll see one of the lanterns that hung from the famous North Church tower, authentic weapons from the American revolution, the contents of Thoreau’s Walden Pond house and Emerson’s study. A visit to the Concord Museum is the perfect way to kick off your group’s American Revolution Tour! 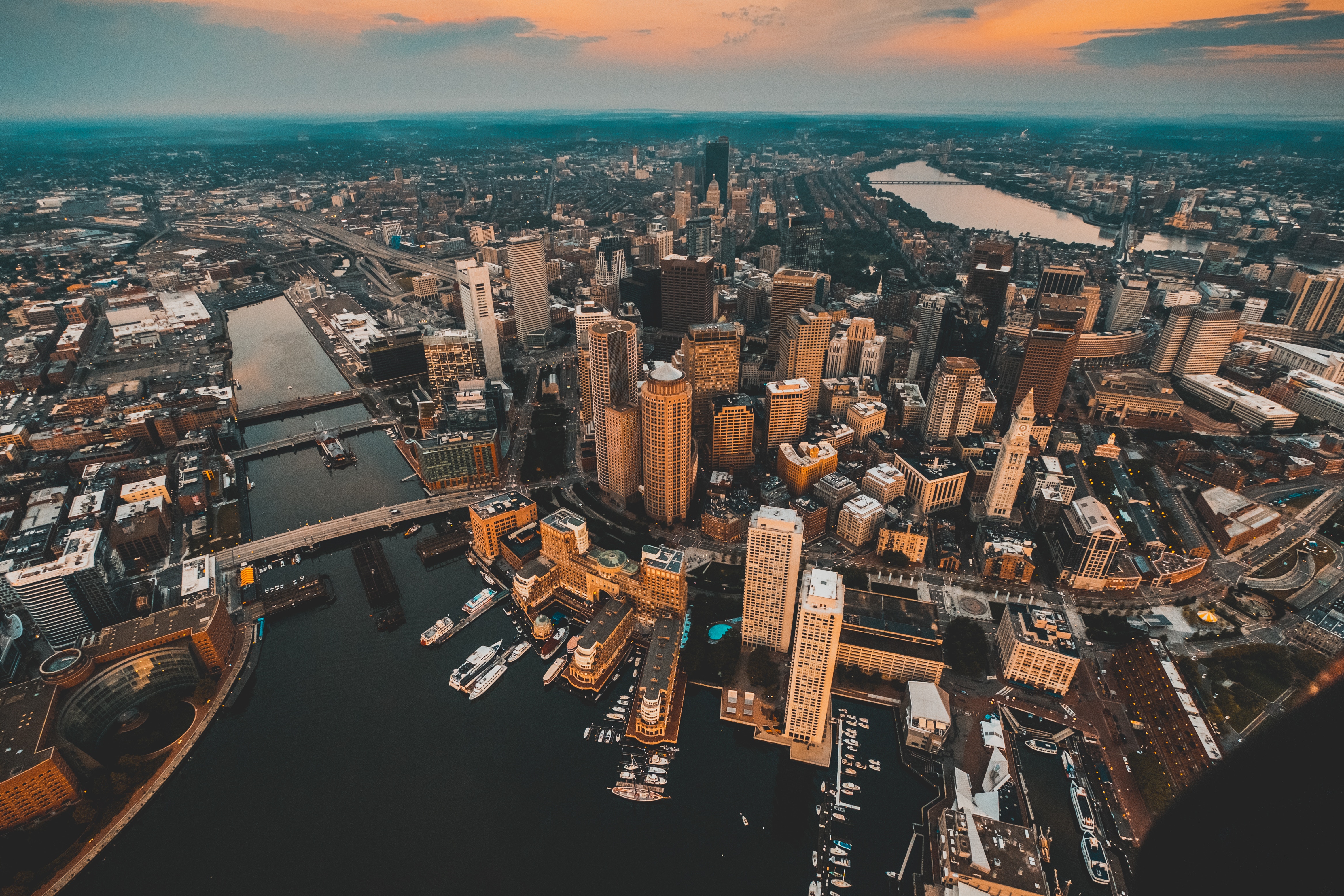 See the American Revolution come roaring to life as you and your fellow patriots explore the battlefields and structures associated with April 19, 1775, and witness the American revolutionary spirit through the writings of the Concord authors. At the Minute Man Center, you’ll enjoy an informative multimedia theater presentation outlining the events of that world-changing day, and an exciting array of ranger-led programs and demonstrations get you right into the thick of things- you are there! Experience the “combat area”, learn what battle training was like in 1775, enjoy a musket firing demonstration, view the Revolution from a Redcoat’s side of the fence, walk the historic Battle Road Trail…and more!

Salem Witch Museum
A visit to the Salem Witch Museum – the most visited attraction in all of The Witch City – will spirit you and your fellow travelers back to 1692. During the Witch Hysteria of 1692, twenty innocent people merely suspected of practicing witchcraft were accused, ripped from their homes and families, tried by mobs of witch hunters and sent down to the gallows. You and your group will “experience” this horrifying 17th-century timeline through a chilling presentation of life-size stage sets, figures, lighting and a stirring narration - during which you’ll learn about the changing interpretations of witches throughout history, the truth behind common stereotypes, modern witchcraft practice and the horrifying phenomenon of witch-hunting.

Boston Harbor Cruises
Ahoy! To close the perfect first day of your “Revolutionary” adventure, your party of intrepid explorers will embark on an entertaining and educational Historic Sight Seeing Cruise of beautiful Boston Harbor. These 90-minute excursions get you out onto the water where you’re regaled with boatloads of relevant legend and lore; you’ll even learn how the “stinky” old working harbor was transformed into one of the cleanest in the country! Cruise highlights include breathtaking views of the nation's oldest continuously-manned lighthouse, the Harbor Islands National Park Area, Boston's working port and a peek at the “lush life” on the stunning waterfront.

National Heritage Museum
The first stop on Day two of your groups’ “Revolutionary” excursion will be The National Heritage Museum. This tidy-yet-venerable institution, a beautiful, hidden gem housing all manner of surprisingly wonderful treasure on the Battle Trail of Lexington places an emphasis on American history and Freemasonry. The Museum, founded and funded by the Northern Masonic Jurisdiction of the Scottish Rite, an appendant body of Freemasonry, also houses the Van Gorden-Williams Library & Archives.

Plimoth Plantation & Mayflower II
While it’s true the original Mayflower no longer exists, you’ll get a pretty good idea of what the Pilgrims’ brave, arduous 17th-century voyage across the Atlantic must have been like as you board the full-scale reproduction, Mayflower II. Suck a bucket of bracing sea air into your lungs and scan your surroundings: you’ll at once marvel and wonder how in Heaven’s name 102 people could cram themselves and their belongings onto such a small vessel – for 10 weeks at sea! Once you’re safely off the boat, a trot through Plimoth Plantation transports you back to the 17th Century; visit an authentic Wampanoag Homesite, explore a recreated English village and experience the bustling Craft Center – where everything on the Plantation - from Native implements and regalia to traditional cabinetry, pottery and clothing - is painstakingly handmade the old-world way by skilled artisans. You’ll even meet the hardy – albeit unusual - Heritage Livestock of Nye Barn and tour a working grist mill!

Dead of Night Ghost Tours
After a fine evening repast, you and your fellow thrill seekers will meet up with your friendly area paranormal investigator who’ll marshal everyone along the paths of Burial Hill, Plymouth’s oldest cemetery, on a truly “Spirited” 90-minute ghost hunting excursion! Be ready; your tender ears will be filled with reels of chilling tales - local legend and lore steeped in plenty of mystery and macabre, sure to have the hair on your neck standing on end and your pals looking over their shoulders! See the original burial site of the Pilgrims and wend your way down one of the oldest streets in America toward Town Square, said to be forever cursed by King Philip. You’ll encounter tombstones dating back to the 1600s, pick up a few tips on deciphering their “cryptic” effigies and epitaphs, discover why restless spirits continue to roam these wicked, winding paths and learn how to capture these incorrigibly elusive phantoms on film.

Freedom Trail
Be it a carefree gambol or deliberate march – a trip down this oft-traveled 2.5-mile brick-lined path will bring your group around to no fewer than 16 historically significant landmarks - the Bunker Hill Monument, Old North Church, the Boston Massacre Site and the Paul Revere House among them - and all along the way, you’ll hear the riveting true tales of the courageous Bostonians and colonists who dared challenge Britain and went on to establish the greatest republic in the world!

Old South Meeting House
This important colonial landmark is more than just another stop on the Freedom Trail, and warrants a little slot of its own on your exciting Revolutionary Tour itinerary; a visit to this 1729 Puritan Meeting House lets you and your travel companions stand in the very place the Boston Tea Party was launched in 1773! Browse the “Voice of Protest” Exhibit; you’ll encounter a variety of authentic artifacts including tea leaves and a tea crate label from the actual Boston Tea Party, a 3-D model of colonial Boston more than 100 years old, John Hancock's portable writing desk and a first-edition 1773 book by slave and poet Phillis Wheatley. Exciting special events, lectures, concerts, scavenger hunts and more happen here year-round; there’s always plenty to see, do and hear at the Puritan Meeting House, and The Museum Shop tenders plenty of pertinent, high-quality souvenirs – something for everyone.

Bunker Hill Monument
The Battle of Bunker Hill – the first major conflict of the American Revolution - pitted a newly-formed and inexperienced colonial army against the highly trained British. Despite the colonial army's considerable shortcomings, it marched under the skillful command of such men as Colonel William Prescott, Colonel John Stark, and General Israel Putnam - men who’d amassed plenty of experience fighting alongside the British in the French and Indian War. Although the British Army ultimately prevailed in the battle, the plucky and resourceful colonists greatly surprised the British by repelling two major assaults and inflicting great casualties. The original monument to the Battle of Bunker Hill was an 18-foot wooden pillar with a gilt urn erected in 1794 by King Solomon's Lodge of Masons in honor of fallen patriot and Mason, Dr. Joseph Warren. In 1823, a group of prominent citizens formed the Bunker Hill Monument Association to construct a more permanent, significant memorial commemorating the famous battle; the existing 221-foot granite obelisk was completed in 1842 and dedicated on June 17, 1843, in a major national ceremony. The newest monument is hollow and encases a spiral flight of 295 stone steps ascending to an observatory with four windows – matchless views of the city await those who tread to the top!

USS Constitution
On this maritime excursion, you and your group will discover the largest assemblage of USS Constitution-related objects displayed in any one location. The impressive collections – which encompass a wide range of artifacts spanning the 200+ year history of the venerable warship - focus on “Old Ironside’s” origin, her crew, how she earned her nickname, her role in the early republic and her part in the present day. Through the showcasing of personal possessions including images, journals, and correspondence, the museum endeavors to bring the story of the oldest U.S. commissioned vessel afloat to life. The Museum Store showcases a “boatload” of USS Constitution-themed merchandise - coins, stamps, jewelry, artwork, apparel and more; you’re certain to haul up that perfect memento of your tour of Old Ironsides!

Paul Revere House
Of course, you’re familiar with Paul Revere - the midnight-riding Patriot and enduring icon of the American Revolution. The son of a French immigrant artisan, the industrious and multi-talented Revere left this world a modestly well-to-do businessman and a popular local figure of some note. An obituary in the Boston Intelligence commented, "seldom has the tomb closed upon a life so honorable and useful." Self-guided tours let you and your group experience the tidy and well-preserved two-story family home much as Revere left it the night of his famous ride. As downtown Boston’s oldest structure, it stands as an intriguing memorial to American revolutionary history, sheltering wonderful exhibits that are, at once, a tribute to the legendary Paul Revere and a memorial to Post-Revolution American life.

Faneuil Hall and Marketplace
This “olde” meeting hall and historic landmark were established way back in 1742. A hoppin’ gathering spot for tourists and locals, alike, it features plenty of live entertainment, fantastic shopping and dozens of excellent dining options; browse locally-owned and loved treasure troves, hit up nationally recognized retailers, and wander the Bull market - the world's first "fleet" of pushcarts featuring New England artisans peddling their fabulous wares. A well-known stop on the Freedom Trail, it is sometimes referred to as "the Cradle of Liberty"; its proximity to favorite local attractions makes it the perfect place to while away a few hours, regroup and recharge, and you’ll find some awesome Boston sweatshirts here. P.S.: It’s also the home of the Finch and Bull – the watering hole made famous in the long-running hit sitcom, “Cheers!”

Old North Church
We’re all familiar with Longfellow’s “Paul Revere’s Ride” but not everyone knows the story behind the verse. On the evening of April 18, 1775, Robert Newman, and Vestryman Capt. John Pulling, Jr. climbed the Old North Church steeple – at the time, the tallest building in Boston - and held high two lanterns as a signal from Paul Revere that the British were, indeed, marching to Lexington and Concord by sea across the Charles River - the most expeditious approach possible - and not by land. (This was actually a back-up plan; Revere was able to complete his daring ride and warn his fellow countrymen.) Founded in 1722 as Christ Church, it’s Boston’s oldest surviving church building and most visited historical site; popular 30-minute guided tours tender guests an engaging, in-depth look at the Old North and its critical role in history.