When you hear the word Hollywood you undoubtedly think of the buzzing streets of a celebrity favorite city with a famous sign above the hills, but what about the other Hollywood, the east coast beachside Florida community?

Both of these cities boast excellent attractions, dining, shopping, and scenery, so what are the main differences between the two? Check it out below!

Did You Know: There are actually 18 different cities that share the name 'Hollywood' within the United States.

Hollywood California was first founded in 1853, though it didn't really start gaining popularity until the early 1900s. The area started as an agricultural and ranching community, then when the film wave hit the country around 1910 many filmmakers started flocking to the area, making the city what it is today.

Hollywood Florida wasn't founded until the 1920s when a man by the name of Joseph Young moved to the area. It is still highly debated on whether Young wanted his own east coast 'La La Land' like the one on the west coast, or he simply liked the name Hollywood and used it for his seaside haven.

One major similarity between both Hollywoods is that they each are part of a much bigger 'parent city'.

Hollywood California is a part of the much larger area of Los Angeles and Hollywood Florida is considered to be a part of the Greater Fort Lauderdale area OR Miami Metropolitan area, as it is pretty much sandwiched right in between the two.

One of the most drastic changes you will find between the cities is the food options, and price of sed options, available in each.

Hollywood California boasts high-quality, higher-priced meals fit for celebrities, as you may guess, some of its most popular eateries being Papilles, The Hungry Cat, and Musso and Frank Grill. The types of food range from Americana steakhouse and bistro style to new infusion cuisines fresh from our countries most up and coming chefs.

In Hollywood Florida, you will have one type of food on your mind the entire time, and that is fresh seafood! Cuban and Peruvian flavors mix with the daily catch in most local eateries to provide a seaside burst of flavor you can only find on the Florida coast. Try J28 Sandwich Bar, Blue Marlin Fish House, and the iconic Jaxson's Ice Cream Parlor.

There is definitely a pointed difference in available attractions in each location, one being more touristy and attraction-based, the other being more nature and recreation based. Here are the top 5 things to do in each Hollywood:

On the West Coast, you will find yourself among the desert hills and busy cityscape in Hollywood, whereas on the East Coast you will be surrounded by the surf, sand, and sun. Hollywood California is more about the bustle of city life, and Hollywood Florida is more about the relaxation and recreation of the ocean. 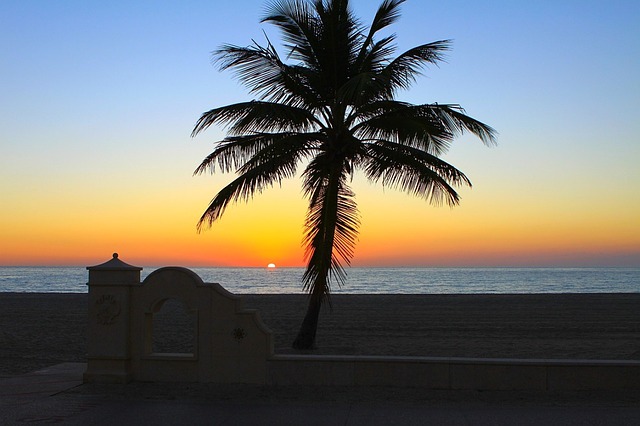 The average daily cost to visit Hollywood California, according to budgetyourtrip.com, is about $190, versus an average of $118 in Hollywood Florida. This may not come as a surprise to you, as you undoubtedly already know that the iconic Hollywood in California is full of celebrities, touristy attractions, and vacationers with heavily laden wallets.

While not completely opposite in temperature year-round, these two cities are pretty far off from each other when it comes to total annual precipitation and low temperatures. You can certainly expect higher temperatures in Hollywood Florida, but also higher chances of rain. In Hollywood California, the weather is more mild, less rainy, and tends to get more cold overall.

Info from US Climate Data