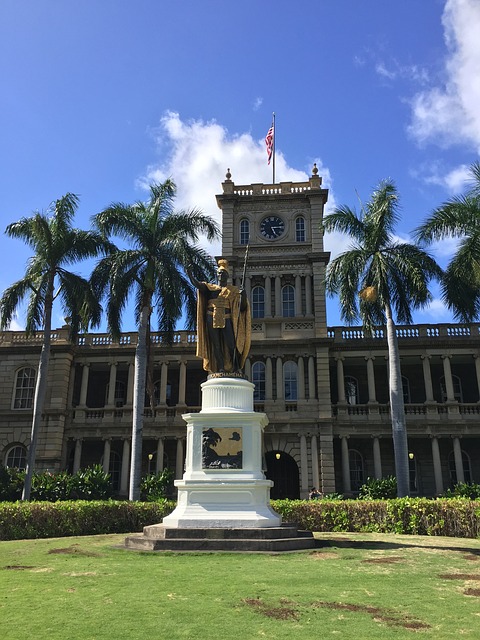 Another big stop on your royally historic Hawaiian tour today is this one, at the King Kamehameha Statue(s).

This stop can be done in one of two ways: at the close by and highly popular replacement statue of the King in the yard of Alilonlani Hale, the Supreme Court building, across from Iolani Palace. This statue was dedicated in 1883 after the original statue forged in Florence, Italy, in 1880 sank aboard a ship on its way over. This is your other option, the original statue, though further away, in Kapaau just beyond Hawaii in North Kohala. This statue sits in front of the Kohala Civic Center and features the real statue, miraculously found in 1912. There are two more statues as well, one of which is in Wailua and one in Hilo. All serve as truly majestic tributes to the Hawaiian kingdom.

The statues themselves represent, as the name suggests, King Kamehameha. This man was a great warrior, diplomat, and leader who eventually united the islands into one larger royal kingdom in 1810. His birth name was Paiea but turned to Kamehameha, which translates into the "lonely one," after a prophecy of his impending death. He survived and became the Great Kamehameha, and can now be visited by locals and tourists as the 18-foot bronze statue. If you happen to be here in the month of June, the 11th specifically, you can witness Kamehameha Day, in which fresh flower leis are draped atop these statues, a beautiful tribute to a powerful king.