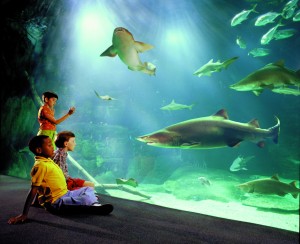 Old Coast Guard Station
Start your Virginia Beach tour off right with a visit to the Old Coastguard Station off of 24th Street on the Boardwalk! This nationally registered historic site was created to honor and preserve the history of Virginia’s coastal community and maritime heritage. In 1871 the Life-Saving Station (USLSS) was created and for 44 years this coastal station saved 28,121 ships and an astonishing 178, 741 lives. In 1915 the U.S. Coastguard was born and this station was renamed and repurposed. After being decommissioned in 1969 this location became a museum (of three varying names thus far) a mere 10 years later, the community realizing the importance immediately of this piece of U.S. history. The museum is located inside the old life-saving station is comprised of two different galleries. One gallery focuses on the U.S. life saving and coastguard services, the other on shipwrecks on the Atlantic coast. Together these galleries hold 1,800 artifacts, 1,000 photos, and an impressive research library holding many historical documents, photos, and newspapers. History fans, patriots at heart, or any traveler interested in maritime practices will absolutely love this historic stop at a once very important Coastguard Station!

Original Cape Henry Lighthouse
This very first federally funded lighthouse was constructed in 1772 on the Atlantic shoreline near Fort Story. Very near to the first landing spot of English settlers in 1607, the still standing sentinel brick lighthouse is a shining beacon in the sea of American history. Located on the army base of Fort Story, George Washington commissioned this lighthouse in 1772 and it has since lived on to provide a century of guiding light to the merchant and government boats traveling through the Chesapeake to larger ports such as Norfolk, Baltimore, and Washington. After being condemned as unusable for cracks in the wall and lantern oil soaked steps, a new Cape Henry Lighthouse was built across from it, this time made of iron. Still in commission today by the U.S. Coast Guard, this lighthouse is private, but a great view of it can be seen from the windows of the original lighthouse. Views of the army base, the forest on which it sits, and the beautiful Virginia Beach oceanfront are all accessible from this well-preserved piece of history, as well as an educational opportunity that dates back to America’s roots.

Chesapeake Bay Bridge Tunnel
Welcome to one of the seven engineering wonders of the modern world, the Chesapeake Bay Bridge Tunnel! This astounding feat of engineering and transportation was built in 1964 and is an extremely important East Coast travel convenience. The 20-mile long bridge-tunnel holds U.S. 13 Highway as well as two one mile tunnels under Thimble Shoals and Chesapeake Navigation systems. On each side of these tunnels are two man-made islands of about 5.25 acres. There are two toll booths at the very beginning and end of the bridge-tunnel, technically named the Lucius Kellam Jr Bridge Tunnel but owned by the Chesapeake Bay Alliance. With transportation making it possible to cross over, as well as under open waters of the Atlantic on this stretch of bridge, it is easy to see why this bridge also earned the outstanding civil engineering achievement. A total of over 116 million commercial and passenger vehicles having crossed it since its inception, putting into numbers just how important this structure is. The bridge-tunnel cuts 95 miles from Virginia Beach to Wilmington Delaware, and also serves as a direct link from Southeastern Virginia to the Delmarva Peninsula. Bring your camera and prepare yourself for a trip across one of the most important transportation feats in the Chesapeake Bay area!

Virginia Aquarium
Get ready for 800,000 gallons of one of the country's best aquariums and animal habitats at the Virginia Aquarium and Marine Science Center just north of the Rudee Inlet. This outstanding marine life learning center houses tons of hands-on exhibits, nature paths, and natural land reserves. Your group will be able to choose from seemingly endless possibilities for fun and learning, and they suggest saving 2.5 to 3 hours to fully enjoy this location. A quick tour of the aquarium will show your group the touch pools of the Bay and Ocean Pavilion, the aviary of the Marsh Pavilion, an Indonesian volcanic island recreation in the Restless Planet exhibit, and a 70,000 gallon Light Tower Aquarium. After you’ve seen all you can within the building head to the National Geographic Theater or Adventure Park zip line over Owls Creek. You can even choose to take it easy on a nature path that leads to the Aquarium Cafe or Otter Snack Bar. Be sure to stop by the gift shop on your way out to pick up a t-shirt or painting that the harbor seals worked so very hard on!

Virginia Beach Military Aviation Museum
The Virginia Beach Military Aviation Museum is the only truly living history museum of its kind and is located at the Virginia Beach Airport. This aviation museum holds the largest collection of warbirds in flying condition in the world, with planes and jets from Germany, Japan, Russia, the UK, and the U.S. The very first in their collection was the Curtiss P-40, salvaged from the Siberian tundra. All of the found or collected planes are meticulously restored by military engineers and put back into flying condition, making this museum unlike most others of its kind. During a tour of the museum, your group can take advantage of the double-decker buses that make seeing everything on the property a little more doable. The tour guide and driver will give you a close-up tour of the master jet base NAS Oceana, which is home to A-18 Hornets and other Super Hornet Jets. You will also see today’s navy fighters, naval aviators, ground crews in action, and the Historical Aviation Park. Be sure to check out if there is an airshow happening while you are here because Virginia Beach Military Aviation Museum air shows are completely out of this world. They put on a WWII themed show in the spring, and a WWI show in the fall every year. Put on your sunglasses and get ready for a Top Gun-esque museum adventure at this exciting Virginia Beach stop!

Sandler Center for the Performing Arts
Opened in November of 2007, the Sandler Center for the Performing Arts is one of the region’s most stunning structures as well as one of the nation’s most acoustically sound venues for the arts. This 1,300 seat hall often sees such groups as the Virginia Symphony, the opera, ballet, and many more local performing arts groups hosting several various talents. The building also serves as an art gallery, admitting serious visual and fine craft artists from around the region and nation. The Behind the Scenes tour is available upon request at any time and is featured throughout the day every Y-Not Wednesday at the venue, a day dedicated to involving the community in the arts in as many ways as possible. During this tour, your group will have the chance to look at award-winning architecture, state of the art amenities, learn backstage secrets, learn the history of the venue and the artists who have played it, and even get to stand on the stage! Once outside your group can delight in the outdoor plaza art such as the most popular piece, Wings. This outdoor sculpture is considered a large-scale kinetic sculpture made of aluminum and catches the eye of visitors and passersby constantly. Be sure to stop by the gift shop or cafe on your way out!