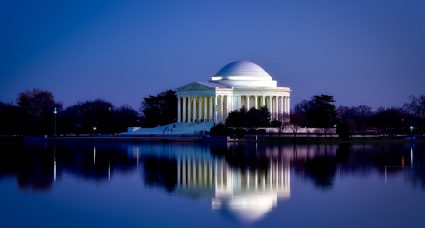 During your group trip to D.C be sure to check out this top attraction, the Thomas Jefferson Memorial. This highly popular presidential memorial dedicated to the legend himself, Thomas Jefferson. Jefferson was one of the most important American founding fathers, being the main drafter and writer of the Declaration of Independence. He was a statesman and a visionary, he was even the first Secretary of State for the United States! His legacy stands proudly inside the rotunda, a 19 ft bronze figure you have to see for yourself.

The columned rotunda was built in the style of the Roman Pantheon by  John Pope, Otto Eggers, and Daniel Paul Higgins. They built the establishment on a man-made reservoir called Tidal Basin, a massive white, neoclassic marble memorial sitting on a reflecting pool well known today. It was first dedicated by Franklin Delano Roosevelt in 1943, on what would have been Jefferson’s 200th birthday.

Explore the Memorial Chamber, Plaza, and Basin during your visit and try to see if you can see the White House from here, the designers building this in a straight line with a stately manner. After seeing the 19.2 acres of plaza space, 54 rotunda columns, 102-foot wide portico, and 165-foot-diameter Memorial Chamber check to see if there are any ranger talks or walks happening. These regularly scheduled tours follow such educational patterns as their current ones: Lincoln’s Inaugurations, Suffragists Rain on Wilson’s Parade, and No Ordinary Time; FDR, The President, and the Constitution.