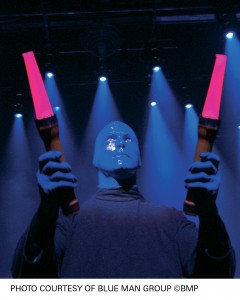 Everyone's favorite bald, blue trio is playing on the CityWalk at Universal Studios, Orlando. This Emmy-nominated musical group, formed in 1991, originally brought in curious crowds with their strange style. Today, they are internationally acclaimed for their unusual music and approach which is easily translated across nations. Situational and physical comedy, narrative theatrics, and percussive art are the basics of this complex group.

Unlike any other group, the Blue Man Group pairs their music with lights and neon visuals into non-traditional storytelling. The bald, blue look supports the view that they are outsiders to our world and so can explore it with a different perspective. Using unconventional tools and techniques, the Blue Man Group creates equally unconventional yet wholly entertaining musical stories. Including comical routines, the Blue Man Group explores commonly accepted aspects of society in a parody-like style. They push on questions about our world and society that we often ignore and they do it with the age-old music of drums and strangely captivating light effects.

Feel the music in your bones, laugh at their routines, and marvel at the light shows as you sit enraptured in the audience. Colorful science, backdrops, and special effects are a certainty when seeing a Blue Man Group performance. PVC pipes, barrel drums, and more are among some of their classic instruments that charm the audience with heart-pounding precision and choreography. Recognize famous music and experience the art of tribal style drumming paired with visual effects.

Known for interactions with the audience, the Blue Man Group also offers group considerations such as after show meet and greets, VIP rooms at their Blue Man Group Theatre, private group performances, and more. There will not be a single un-entertained person in your group if you decide to see a Blue Man performance.