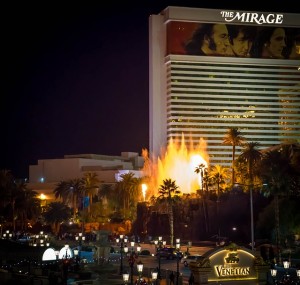 In the course of your adult group trip to Las Vegas, you should check out the Volcano at the Mirage Hotel. It is considered to be one of the most popular attractions on the Vegas Strip. The attraction opened in 1989. The volcano is a combination of fire, music, and choreography that makes it beautiful and thrilling at the same time. Group members of all ages will enjoy this one-of-a-kind experience.

The volcano consists of two volcano systems, a lagoon, and fire shooters that shoot flame on demand. The massive fireballs are capable of shooting more than 12 feet into the air. There are also waterfalls with surrounding pools which include fire and smoke effects. Another exciting highlight of the attraction is its hypnotic music score. The score was composed by Mickey Hart, the legendary drummer from the Grateful Dead and Indian music composer Zakir Hussain. In the course of the composing process, the two studied legends, myths, and history about volcanoes. As a result of learning the information, they incorporated instruments from all over the world into the exclusive soundtrack. This unique musical masterpiece infuses chants, percussion, and other tribal elements.

The volcano’s sound recordings come from actual eruptions. Group members will feel the rumble from the state-of-the-art sound sonic sound system. There is a state-of-the-art computer system that makes the massive fireballs move to the rhythm of the music. The group can get the best view of the volcano show from right in front of the hotel. You will be up close where you can feel the heat of the flames and hear the pulsating soundtrack.