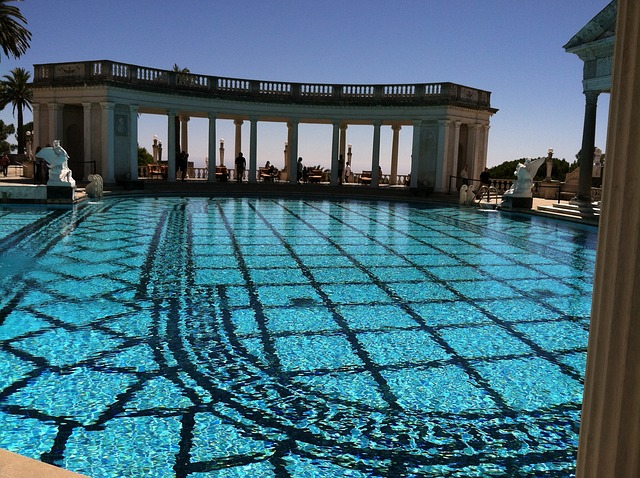 Built in 1919, this historic landmark strikes a domineering yet elegant pose on the scenic coast of Central California. The phenomenal exterior of the mansion strikes the imagination with its oddly beautiful mix of Mediterranean, Spanish, and other 19th and 20th century architectural styles. Its history, too, strikes the imagination and has attracted visitors from all over since opened to the public many years ago.

Originally built for newspaper mogul William Randolph Hearst, this self-proclaimed castle boasts more than 90,000 square feet and 165 rooms, not to mention the several pools, outbuildings, and 127 acres of gardens. 40,000 acres were initially purchased by Hearst's father, though that number more than doubled to 250,000 acres and evolved into not only a castle but a ranch as well housing many exotic creatures including a group of zebras, Rocky Mountain elk, American bison, and more.

Two of the most famous attractions at Hearst Castle are the Neptune Pool and the Roman Pool, luxurious representations of the fabulous historic baths of the ancient Roman empire. The extensive wine cellar with its Prohibition Era history, the estate airport, the zoo, and the gardens are also highly popular attractions for touring groups.

As Hearst Castle is so large, there are a number of individuated tours based on estate themes. The Grand Rooms Tour focuses mainly on the social rooms of the largest building on the estate, Casa Grande, and is recommended for first-time visitors as it requires the least amount of stair climbing. There is also the Upstairs Suites Tour, Cottages and Kitchen Tour, and Evening Tour which is a special treat, a tour led by costumed guides as part of a living history program. Also recommended is the Hearst Castle Theater where your group can start their adventure with an introductory film on the history of the estate and its founding family, all on a massive five-story screen. There are dining options at the Visitors Center if your group finds themselves hungry after their hike through the castle, as well as information about the San Simeon, California, area and other nearby attractions.