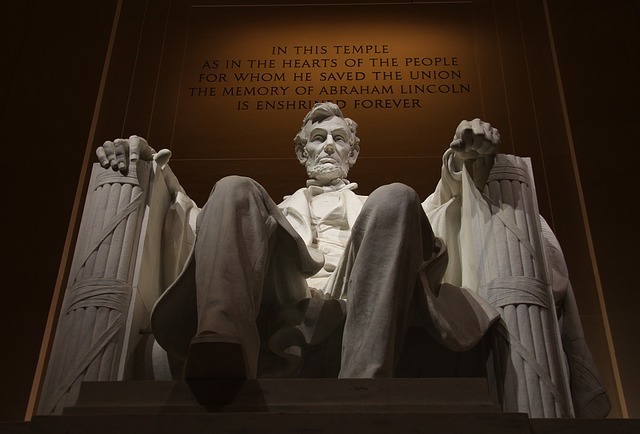 This classic Greek style monument was built to honor the Great Emancipator, Abraham Lincoln. The 16th president is perhaps best known for his striking appearance, command of speech during the famous Gettysburg Address, and his act of emancipating the slaves during the Civil War. The Lincoln Memorial and surrounding grounds were created to preserve and uphold the president’s legacy and his revolutionary advances for the American public.

Located on the west end of the National Mall, the Lincoln Memorial is situated in a place of power and prestige. The memorial was designed to resemble a Greek temple with a 19-foot tall white marble statue of President Lincoln seated overlooking the reflecting pool out towards the Washington Monument. On the steps and lawn of the memorial, historic events such as Martin Luther King’s moving “I Have A Dream” speech and the 1963 march on Washington are commemorated with plaques.

The interior of the memorial is divided into three chambers by 36 Greek Ionic columns to represent the 36 states that existed at the time of Lincoln’s death. Inscriptions stand witness to the president’s philosophies and principles with quotes taken from his second inaugural address and the Gettysburg Address. Murals depicting the values and characteristics of a great leader including equality, charity, justice, unity, and fraternity are painted above the inscriptions.

Though the memorial was commissioned in 1867, the dedication did not occur until 1922. Lincoln’s only surviving son, Robert Todd Lincoln, was in attendance at the dedication ceremony at 78 years of age. The parks and monuments on the National Mall are open to the public 24 hours a day through early morning and dusk are the most beautiful and serene times to visit.