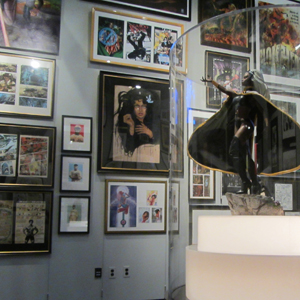 When you take a trip to Baltimore, you should stop by and check out the Geppi's Entertainment Museum. Exhibits at the museum center on the theme of pop culture with galleries like the Pioneer Baltimore Heros where visitors can learn about individuals and groups that have played the role of making the city what it is today. Guests of all ages will enjoy the museum where childhoods live on in a nostalgic display of culture.

While you're here you should also check out the Extra Extra exhibit which focuses on entertainment characters from 1776 to 1927. You will enjoy learning about these interesting characters and rediscovering childhood favorites. Another exhibit is known as When Heroes Unite, offering visitors the opportunity to learn about the characters that made the hard times easier from 1928 to 1945 such as Mickey Mouse and Superman.

A Story in Four colors, also known as the Comic Book Library, grants visitors the opportunity to check out a fascinating collection of comic books. Visitors will discover how the entertainment characters that are depicted in the books have influenced the development of pop culture.

Finally, check out the America Tunes In an exhibition that focuses on television from 1946 to the year 1960. You will learn about the peanut gallery, the old west, and deep space. Television also brought world events into homes. During this same period of time, the beat of America changed when rock and roll took the nation’s youth by storm.