The Terminal Tower in Cleveland is one of the most prized landmarks the city has, with a very rich history and even richer cultural icon status. The tower is 52 floors tall, which doesn’t seem very impressive until you realize that this building was constructed in the 1920s. It was the largest construction project in the nation in the 1920s with a huge excavation beginning in 1924. 1,000 buildings were torn down to fit the construction, and when it was complete in 1927, it was the tallest in the world outside of New York City, a title it held until 1967. Besides being the first and last thing most people see on their way in and out of the city, it used to be the way men left for World War II deployment on the train, as well as the way they returned. 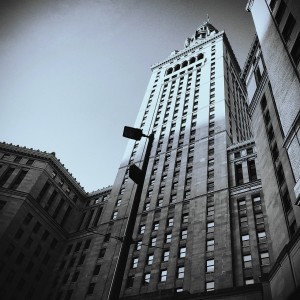 The Observation Deck is 42 floors up and provides absolutely breathtaking views of downtown Cleveland, the flats, Lake Erie, Cuyahoga River, and the outlying Cleveland suburbs. The 360-degree view will allow your group to see 30 miles into the distance. This sightseeing opportunity is only open to the public seasonally during the weekends and is limited to 30 minutes per group (including elevator time) so be sure to spend your time wisely as you gaze at the wonder of Cleveland from above, or perhaps frantically snap as many pictures as you can! The Observation Deck hosts holiday light shows as well, such as the Love and Lights Valentines Day special or the Light the Night Christmas Special, providing a great city landmark still igniting wonder in visitors today!