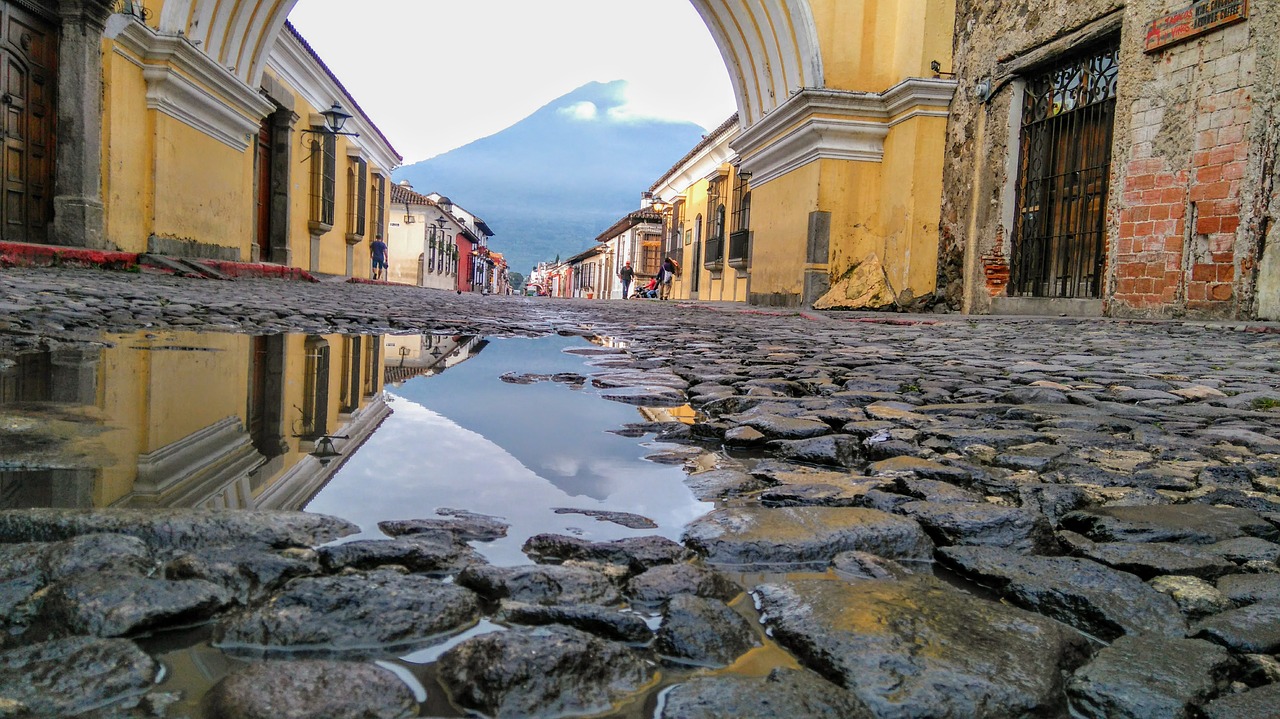 Cloistered in history and shrouded by the embrace of tropical forests, deadly volcanoes, and natural wildlife, Antigua, Guatemala is at once beautiful and aloof. Famous for the preserved Spanish Baroque architecture and colonial church ruins, Antigua offers a stunning array of sites not created for the sake of tourism but out of pride and religious desire to create art through God. Founded in the early 16th century, Antigua originally served as the country’s capital until it was destroyed by an earthquake and subsequently buried by an avalanche in 1773. Although the capital was moved to Guatemala City, Antigua is still felt to be a city of great importance both historically and socially.

Built on a city pattern influenced by the Italian Renaissance and decorated with Spanish Baroque and Colonial style architecture, Antigua is fascinating to experience. Seeming to be a unique amalgamation of style, the city bears no pretension and welcomes visitors to learn about her past, her culture and people, and their way of life.

Some of the most popular attractions in Antigua circle around the religious buildings. The city was a major religious center during its days as a capital city and it maintains its fervor with distinction. The Church and Convent of the Capuchins, built in the 18th century, was one of the best and brightest examples of the Catholic faith during its time. Abandoned after the damage done during the Santa Marta earthquakes, the convent and church stood empty for a long while and is now open for tours, religious retreats into its sanctuaries, and historical programs. The San Francisco Church, likewise, is a beautiful Catholic church popular for the shrine of Peter of St. Joseph Betancur.

Standing at an impressive 1,500 meters above sea level, Antigua has the ecosystem to sustain much of the beautiful wildlife of Central America and support intensely interesting natural features. Surrounding the city are at least three major, active volcanoes including Acatenango and Pacaya. Both are picture perfect peaks rising as much as 3,500 meters above the Pacific coastal plain. Pacaya’s volatile peak is a popular tourist destination where you can drive to the rim of the crater and look into the smoking chasm. Although you may not want to climb all the way to the top of Acatenango, the valley below is home to some of the country’s finest coffee plantations where you can take a tour and sample the various brews.

Antigua isn’t only about history, architecture, and nature, though that’s enough to bring in thousands of visitors every year. Hotels and resorts like Casa Santo Domingo attract tourists with their sensational gardens, luxurious accommodations, and delicious meals for a relaxing vacation in a gorgeous natural setting. If you prefer something more authentic and Guatemalan, don’t miss out on sites like the Arco de Santa Catalina, the Plaza, and the many shops and restaurants throughout the city.